Do you read in the bathroom? Well, you might appreciate this new literary experience—a horror story in the form of toilet paper!

Each roll is printed with several copies of Drop, a nine-chapter novella written by Koji Suzuki, author of the Ring cycle of novels, which has been made into films in both Japan and Hollywood.

According to the manufacturer, Hayashi Paper, the disposable bathroom wipes would be “a horror experience in the toilet,” and will be sold for 210 yen ($2.20) each starting soon on the internet and department stores. 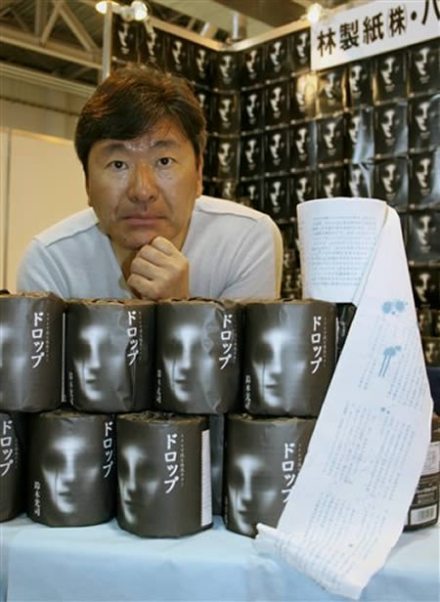 Packs of pocket tissues are often given out free in Japan as a cheap, effective method of advertising. It sure beats getting pesky flyers which are soon thrown away!

Believe it or not, I hardly buy pocket tissues in Japan because I get them for free. When I walked past Yokohama station one day, I brought home five free packs with advertisement inserts.

Once, when I asked my American friend’s teenage daughter for some tissues, she said : “Mrs. Mori, please don’t use the whole pack. You see, I like its cinnamon roll scent.”

Stunned, I asked: “You bought it merely to smell it?”

I didn’t use her tissue paper. Instead, I took a snapshot of it after sniffing it.

I usually have a stock of free tissues (including the wet type) to withdraw from. They came to my rescue last month when I suddenly had stomach ache while shopping.

I panicked when the toilet rolls in a shop’s loo were all used up. Boy, I was relieved upon realising that I had two packets of pocket tissue and a wet pack in my handbag!

Advertising in Japan: A man promoting his newly opened shop in Japan with free pocket tissues.

Tissue-pack marketing has been a most common (and also an inexpensive) tool in advertising. Compared to flyers, people are more likely to accept a pack of pocket tissues.

A discount coupon is sometimes enclosed in it, thus tempting customers to look at its advertisement (and consequentially retain it whenever they use the tissue).

When an establishment is newly opened, the staff will often stand in front of it, distributing free pocket tissues to passers-by.

Other hot spots to hand out these freebies are outside train stations, near bus stops and at shopping arcades.

There’s little need to buy pocket tissues in Japan as they are often given out free by people advertising their products or services.

The concept of tissue-pack marketing first originated in Japan. It was the brainchild of Hiroshi Mori, the founder of Meisei Industrial Co., a paper-goods manufacturer in Kochi prefecture. He was searching for ways to expand demand for paper products. Inspired by the standard-size boxes of tissue (a novelty in the 1960s) imported from the United States, he was struck with the idea of developing the machinery to make pocket-size packs, in l968.

The popularity of using pocket tissues for marketing purposes replaced the most common giveaway item then – matchboxes. Banks were the first purchasers of his company’s pocket tissues to give to clients as part of their customer service.

Distribution of free pocket tissues took to the streets in the 1980s. Even government agencies (and other organisations) are utilising this advertising medium for crime prevention or to raise green consciousness. Recently, I received a pack of tissues with campaign messages against the yakuza (organised crime syndicates).

Four billion packets of free pocket tissues are said to be distributed annually in Japan. To attract attention, the inserted advertisements include pictures of famous artistes such as AKB48 pop singers or other celebrities.

A packet of free tissues with messages campaigning against yakuza organised crime.

Pocket tissues are incorporated in lucky draws near the end of the year in some shopping districts or department stores. Customers purchasing a certain amount are entitled to draw from a lottery machine and most get pocket tissues as prizes. And to enhance the festive ambience, each pack comes with a cute printed picture of the year’s zodiac animal.

It is quite common to target certain demographics when distributing free tissue packs to passers-by. For example, a company promoting a beauty product for women will go for females.

However, not everyone will take the free packets. Perhaps they have their own and do not wish to stuff their bags or pockets with more pocket tissues?

At a campus, I once saw a table (set up by a driving school) full of promotional pamphlets and free pocket tissues. Even when the school’s employees were not around to man the table, very few students helped themselves to the tissue packs, despite the “feel free to take” note. A Japanese friend also told me that some people will reject free pocket tissues offered on the streets as they do not want to show greed.

Occasionally, I have accidentally laundered packs of tissues together with my clothes. The worst part was disposing of bits of tissues plastered to my clothing!

Despite that minor hiccup, I don’t mind accepting free pocket tissues. How about you?
by SARAH MORI
From TheStar

Simple ways to Brand your Business

Branding your business is simple! if you follow the below steps….

What’s the first thing you want people to think of when they see your company name or logo? As a entrepreneur it’s essential you look after your image and reputation. And after determining upon your company name, the next step is to consider your promotion. That is because a excellent powerful brand is easily acknowledged and unique.

Often companies ignore that brand marketing is far more than just a name, logo, tag line and set of shades. An item is a set of principles that are associated with a business’s goods and services.
The principles you embrace is determined by your company but could consist of advancement, quality, effective, quick, effective, elegant etc. Also promotion is appropriate to your promotion because it is a way of organization and interaction. In fact customers will affiliate manufacturers with specific goods and services. And often a powerful brand can help effect buying choices and encourage someone to choose your goods and services over a rival’s.

Here are four easy steps to help you with branding:-

The graphic effect of your brand is essential. So analysis a number of innovative choices. Make a style brief and consist of concepts and a requirements of design that you like and don’t like. If you have a designer working with you, ask them to put together a few principles based on some of your thoughts and their own analysis.

When developing your brand, think about:
• Vision: What you want your brand to become.
• Promise: What your dedication will be to customers.
• Delivery: How you plan to provide your commitment
• Positioning: How you want to be recognized.

Branding your company is not just about style and elegant tagline. It also needs to link into your company strategy. Let us say you want to develop a aggressive placement technique. You will need to “distinguish” your product/service providing and offer value for your potential viewers. To do this you’ll need to:

• Decide on the potential audiences you wish to engage in.
• Define the characteristics of your company and the industry it plays in.
• Clarify your product/service key benefits and what makes you different from the competitors.

Brand technique may not seem essential to your company NOW but it’s definitely something worth considering early on – even if you are just writing down a few points on a page for referrals.
You see, in the future, excellent promotion makes ‘brand equity’.

A excellent brand can help to create connections with your customers and build client commitment. It also places value on your goods and services. In addition, if your brand is recognizable in your promotion action, it could increase your reaction rate.
When developing your coverage need to consider how your brand/ logo will appear on premium gifts e.g. T-Shirt, top quality presents like pen & Tissue pack marketing?

Keep in mind to consider logo measurements, font, font size, color and cases as the fundamentals. You may also want to consider different color choices of your logo, position/weighting on multi-branded components too.

Besides style and all the graphic things, it also contains brand wordings and style.
It’s essential to choose on how you’ll handle your brand continually as well as handling the views of anyone who involves with your brand, such as team, providers and customers amongst other categories. This is all part of name management and you should have this in mind at all times.

Finally, whenever someone involves with your brand they should have a positive brand experience. How are you developing your brand into a useful resource for your company marketing?

About Tissue King:
Establish in 2005, Tissue King is a key player in Tissue Pack Marketing in Malaysia & Singapore. We offer branding and marketing service for SME industries to promote their brand using Tissue Pack Cover.